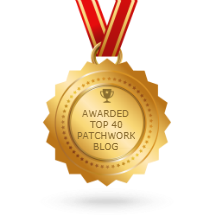 Following no ‘spots’ in February, two came along in March. The first was ‘Witness’, the 1985 movie, staring Harrison Ford and Kelly McGillis, about a young Amish boy who witnesses the murder of an undercover police officer. Given that this movie was made over 30 years ago, I can safely say that I’ve seen it numerous times before, but this was first time since writing my ‘quilt spots’, and I knew, given that it is set in the Amish community, that there would be a few quilts to spot.

And the movie does not disappoint! One scene I particularly like is of a group of women quilting whilst the men build a new barn. The quilt features lovely hearts and flowers, appliqued against a white background.

I liked seeing this quilt as I always tend to think of Amish quilts as featuring solid darks colours in large geometrical blocks (which I also love!), like the one pictured below, hanging on a washing line in another scene of the movie.

And then there was another quilt I spotted, draped around Harrison Ford. The colours are dark and sombre, and the block pattern seems to be courthouse steps, but the fabric appears to have a slight sheen to it, so I wasn’t sure if this one was quite accurate.

I think I have more reading to do on the subject of Amish quilts. After a quick ‘google’ search I came across the following blog post which is quite interesting: The History of Amish Quilt Making | Amish Outlet Store.

I’ve always liked the idea that Amish quilters used to deliberately put in mistakes in their creations to pay homage to God, as ‘only God is perfect’, but this is in fact considered a myth. However, I do like the notion of it – it does resonate with me, and if I end up with a ‘mistake’ in a quilt, I tend to think, “well, I’m not perfect!”

The other spots were in ‘Hillbilly Elegy’, staring Glen Close and Amy Adams, based on the memoir of JD Vance. It’s a difficult movie to watch, flitting between scenes of JD’s chaotic upbringing, and when he’s a young man studying law at Yale.

There were two quilts I spotted. One draped over the sofa in JD’s grandmother’s (Mamaw) house, and the other in a flashback scene when JD’s mother, Bev, was a little girl. Bev and her sister are hiding in a closet as their mum (Mamaw) and dad argue violently… following which Mamaw sets him alight (!) as he lies passed-out drunk on the sofa… When Mamaw leaves the room, Bev rushes out, grabs a quilt that’s on the sofa and puts out the fire with it…

It’s hard-hitting stuff… However, what I loved about the movie is how it shows JD’s strength of character. He is proud of where he comes from, especially when others seem to sneer at him for it. One quote will stay with me: “Where we come from is who we are, but we choose every day who we become.” So true.

Have you spotted any quilts in movies or on the telly? I’d love to know! Drop me a line and share your ‘spots’ with me.